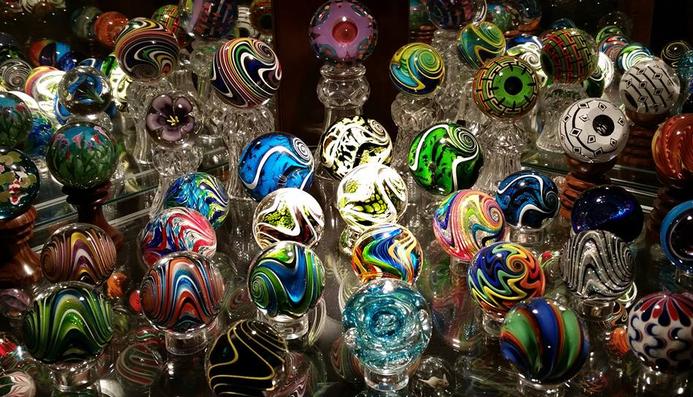 All of my marbles are individually handcrafted using a large oxygen / propane torch.  They are initially shaped using half-round graphite molds and finished, with painstaking perfection, using cherry wood molds.  They are "torch worked" marbles, and even though some may be similar looking, each one is actually built, one at a time, in the flame.  I try as hard as I can to make all marbles of each specific style look similar to the ones shown on my site, but because of their handmade, "one off" nature, they will vary slightly in pattern.

When I need to figure out a process, how to achieve a "look," or to make the glass do what I'm thinking, I often do a quick technical study.  I think of this in terms of a painter having a sketchbook.  When they have ideas, they draw or paint them in the sketchbook.  So too, when I have ideas that I want to quickly try out I make "test sketch" marbles.  They're typically one-inch or smaller because it's much faster to work in that size range.  These marbles, signed "TS", then sit in a bin on my workbench where I refer to them periodically for inspiration, again like a painter looking through a sketchbook.  Each one has a story and a purpose to me - each one was a specific attempt at a new or evolving technique.  Occasionally, these marbles are offered for sale.

Marbles that are made as experiments, trying a new technique in a "production" size (rather than the small "TS" size), or testing color combinations in a given style, etc., are signed with "EXP" below the year.  (See the third example below.)  These are either one of a kind marbles, or they are the very first of that particular style/color combination in a "production" size, as is the case below.

In October of 2002 I started adding an Ichthus (faith fish) after my AF logo.  The third marble shown below was the first one that ever had that symbol added.  The symbol is now added to all of my work in recognition of God's gift of talent to me and his constant help and guidance in making my marbles.  It also acknowledges my faith in Jesus Christ as my savior and says that I will always try to act with utmost honesty and integrity in all things that I do.