The marbles listed for sale on this page are from my personal collection.  Over the years, as I tried new techniques and designs I would often keep back experiments or prototypes that I liked.  Marbles marked with a "P" after the date are the prototype for that style - meaning that from that point on, any that were made in that style and color combination would be named the same name and their sequence numbers would start from 1 (one) at that point.

As I was starting out I didn't have all the "conventions" worked out, so you'll also see a few early marbles that are marked "AP" for artist's proof.  To me it meant the same thing - it was the prototypical marble for that style and color combination - and I later dropped the "AP" for the simpler "P".

Early on I started signing some marbles with EXP after the date.  These are "experimental" designs or color combinations.  They were sometimes but not always a one-of-a-kind marble.  I'll try to distinguish in the descriptions of the marbles for sale whether or not they should be considered a one-of-a-kind marble.  For more on my signatures and numbering see my "About" page.

Thanks for taking a look!  I hope you enjoy seeing these early examples, and hopefully you'll find something that you'd like to add to your collection. 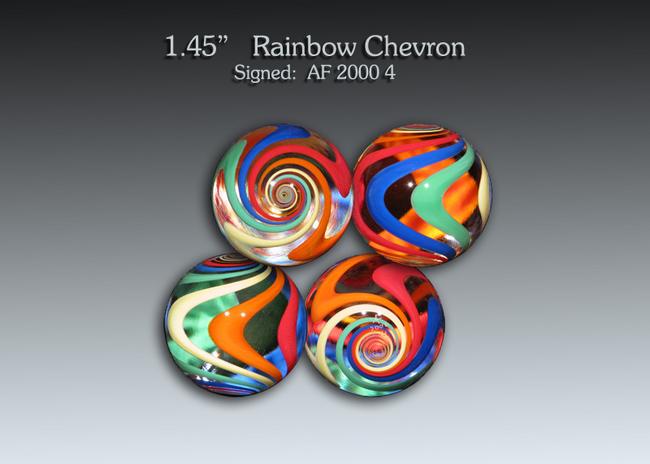 This is an Aurora Borealis style with teal-green and blue dichroic glass swirling around with a backward twist on two sides.  It was one of the first marble styles that I made using a furnace.  I finished building the furnace in early 2000 and set out to teach myself to use it.  My first few "furnace" designs were simply marbles that I had been making using only the torch, so it was a matter of trying to figure out how to get a clear coating around the entire marble.  It took some trial and error, but this design finally emerged.  The Aurora Borealis series was done in several different color combinations and there were sequence numbered marbles of this design made after this one. 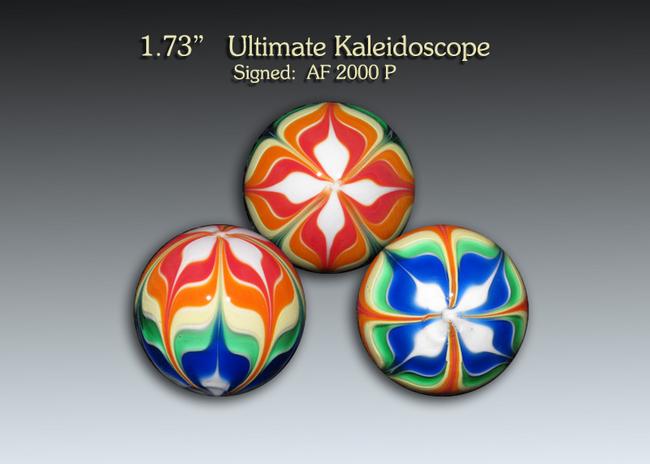 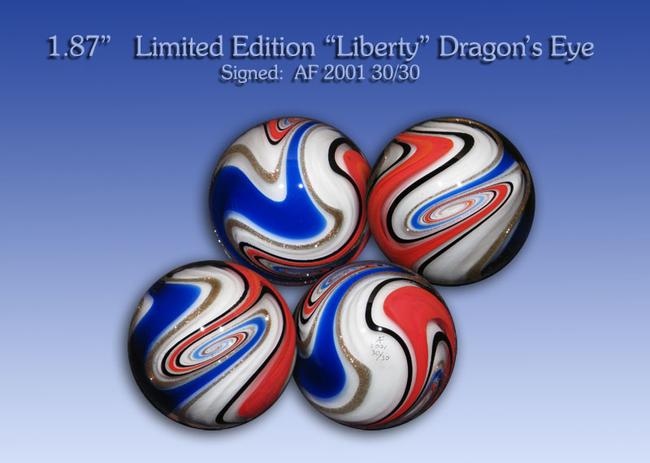 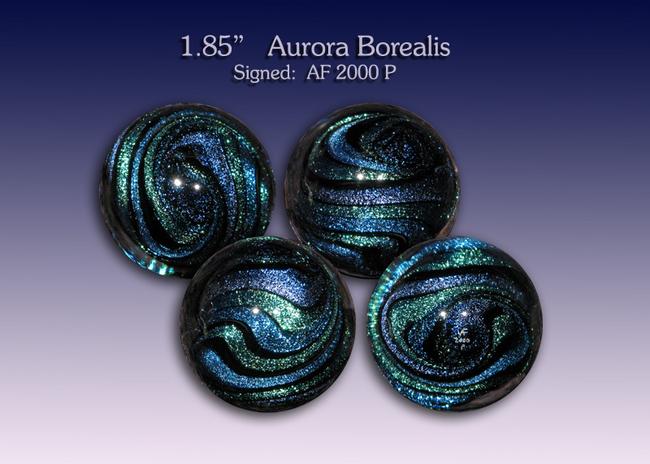 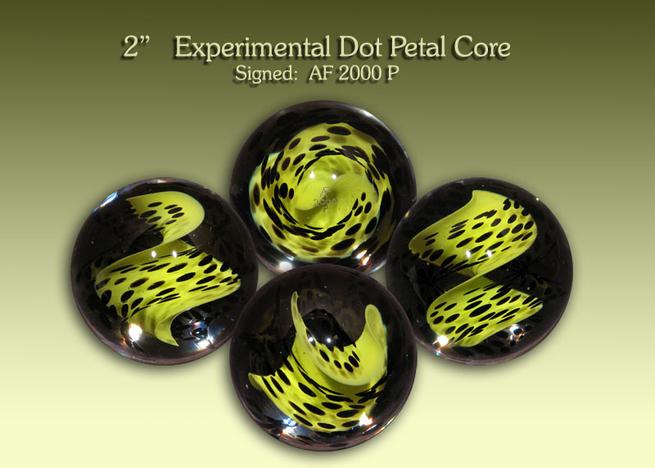 This Ultimate Kaleidoscope is another very early one and again was during the time I was trying to figure out how to use the furnace I built.   It's actually a very interesting marble from an historical perspective because you can see at the bottom that I hadn't fully figured out how to close up the design without being able to tell what I did.  It was very frustrating at the time, but it made me a better marble maker, ultimately!  Normally, my practice was to destroy marbles that had flaws that I should have been able to avoid.  I've kept this marble around for years just to keep me humble.

I made very few of these in this size.  Prior to building my furnace I made this design using only the torch and I couldn't make them any larger than about 1"-1.25".  After I got used to my furnace and discovered the new designs I could make, this design was basically retired.

This is an experimental style that I never issued in an open edition.  I was doing two things at the time I made this marble.  1.) I was trying to come up with styles that I didn't see other people making.  2.) I was trying to mix some of my own colors that I couldn't buy at the time.  This new shade of green was used in later marbles, and combining the petals (or layers) with dots was something I tried in different ways, but not like this.  This marble, with only a single green layer, is a one-of-a-kind marble.  At the time I signed it I anticipated making more of them - therefore the "P" designation. 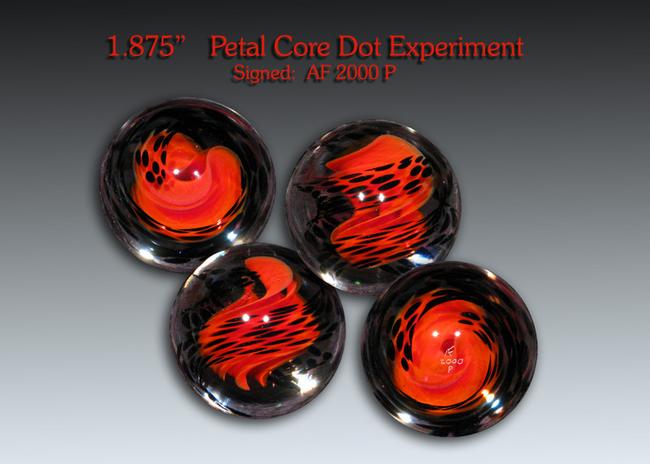 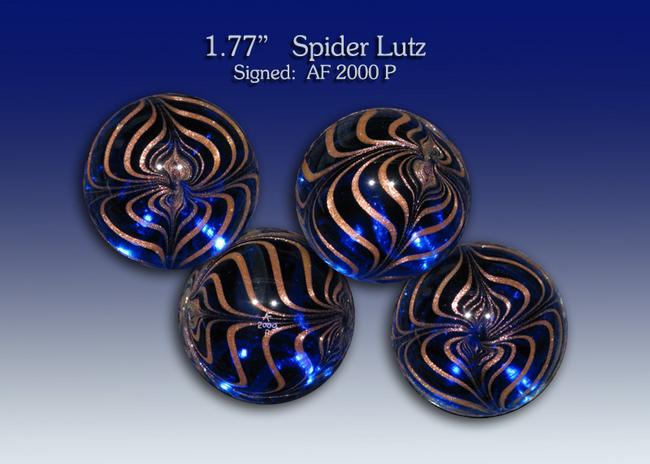 This is another experiment that I did when I was getting ready to do the production run of the Petal Core Dot series.  I was still experimenting with the amount of twist at this point.  I had also been trying to develop a red color that I liked.  This was the first of my marbles to use this translucent red that I developed. The production version of this marble ended up using this color of red, but it wasn't twisted this much.  Therefore, this one is truly a one-of-a-kind marble.  It is signed AF 2000 P for prototype (at this point in my career I hadn't distinguished between prototypes, artist proofs and experiments. They all got a "P" or "AP" depending on how I felt that day...?)

This again is one of the first styles of marble that I produced with the furnace I built in February 2000.  Prior to that, all of my marbles were produced using an oxygen/propane torch.  The "Lutz" in this marble, also called "goldstone," is actually copper that has crystalized as glass that has been super-saturated with copper is cooled slowly in the crucible.  After is has cooled, the crucible is broken away and the remaining lump of glass is broken into chunks.  The chunks can then be pulled into canes and used to decorate other glass objects.  My Spider Lutz was produced in both transparent blue and transparent green.

The "Dragon's Eye" was a style that I came up with during my quest to come up with designs that were fresh and new.  It's actually a fairly common style now, but back in 2000 when I came up with it I certainly had never seen it done.   The "Liberty" edition sold out more quickly than any of my other limited editions.  I kept back two - #1 and #30.  My motivation for holding back two of them was two-fold:

1.   I have two kids and I thought I would save one for each of them.

2.  I wanted to see if there was any discernible difference between the first and the last in the edition.

As I look at them today I don't see any difference.

(As for my kids, don't feel sorry for them.  They'll have enough other marbles to choose from.)

This is one of my earliest furnace marbles.  It's a Rainbow Chevron signed AF 2000 4 (signifying that it was the 4th one I made) and it measures 1.45".  The signature can be seen in one of the photos just off center of the bottom pole.

This marble is historically significant for me because it is one of my first "hybrid" marbles.  It started with a gather of clear from the furnace.  The stripes were then applied and the marble finished in the torch.  Since I had never seen anyone make a "furnace" marble before, I didn't quite know how to maximize the use of the furnace.  I eventually figured out how to dip marbles back into the furnace to give them a much thicker coating of clear.  Had I done that with this marble it would have ended up close to 2" in diameter.